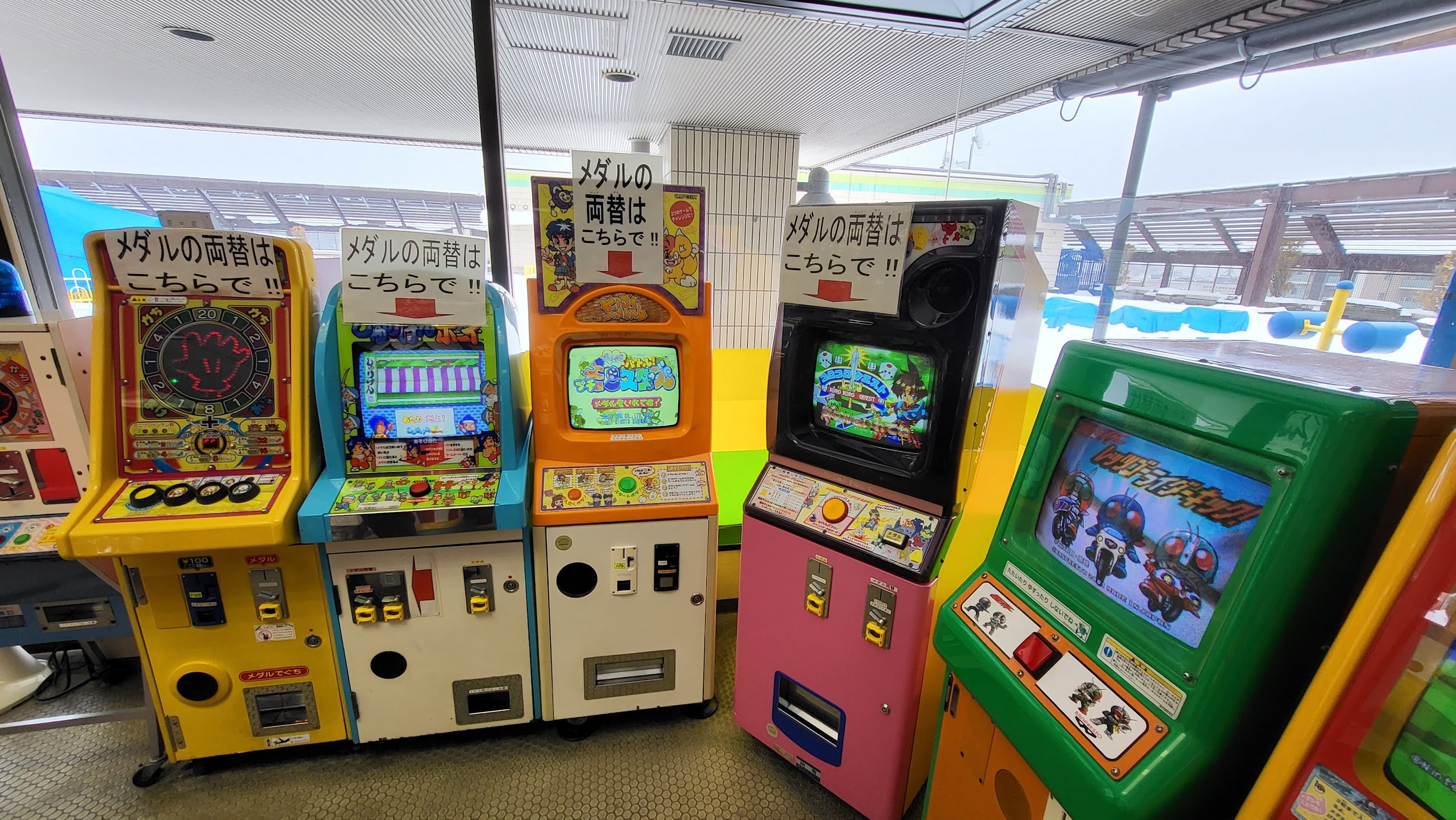 The other day I stumbled upon a small, kid-focused retro arcade on the roof floor of a mall in Kanazawa, Japan. As a hotel attendant told me, "it's a bit like time has stopped..."

I was familiar with most of the games - crane game variants, child rides, gachapon machines, air hockey.

But a few were new to me. An Anpanman-themed popcorn machine (who, in its waning usage over the past decades, had gone from five flavor choices to a single "salt" flavor). A game where you have to scoop a certain weight of marbles within a time limit, without seeing the live weight measurement. A game where you can call Ash Ketchum with an old phone receiver and have him talk you through a few pokemon minigames. 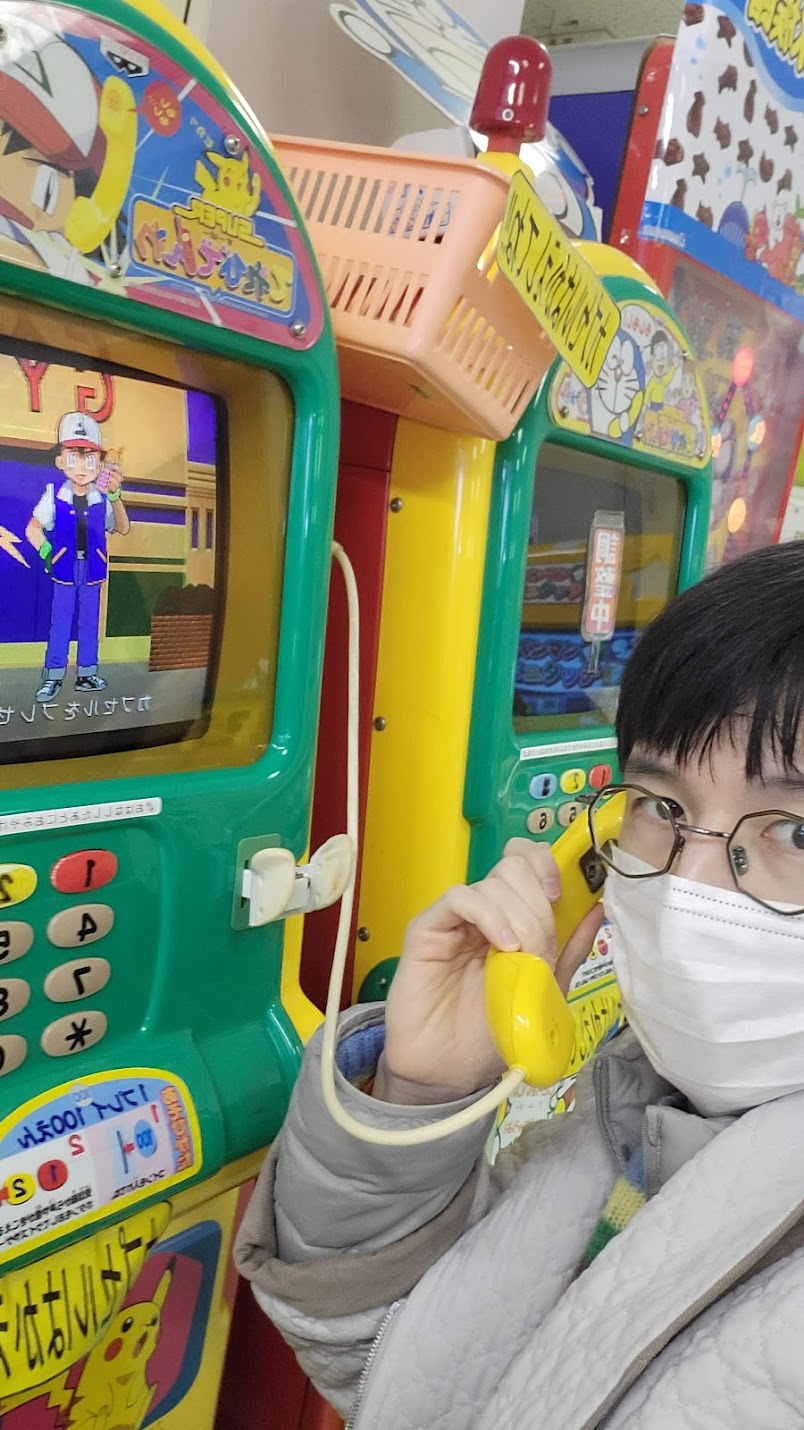 The most interesting were the "Kids' Medal Games".

The Kids Medal Games had CRT monitors, tinny audio, simple control interfaces (usually one or two huge push buttons.) You exchange 100 yen for a number of medals/tokens. (In this arcade's case, it was 11 medals)

You then bet 1-3 medals on a game (kind of like slot machines! Hm...). More medals increases your odds of winning, and you can win anywhere from 1-50+ medals, although you usually lose. Games are designed to be simple enough for small children to play, usually revolving on button mashing, and occasionally timing (although it seems the games probably 'cheat'). I'd assume medals used to be exchangeable for prizes, but at the arcade I was at, you would eventually lose all your medals, the odds being what they are.

So I decided to review the medal games there!

A mediocre game where you get one to three attackers based on the medals you put in. You drive along a highway, and hit the button to launch your riders at the enemies (who have medal values of 1-10+). It's random if you defeat an enemy, but if you do, you win that many medals. 0/5.

A game about a boy ninja who isn't very good at throwing the titular shuriken, since he misses 99% of the time! This has the same mechanics as Kamen rider, but betting more gives you a 'more powerful shuriken'. The graphics are cute. I give it a 1/5.

Further tarnishing Banpresto's track record, in this game you randomly try to catch pokemon sitting around a screen. You get one chance per bet. Somehow, I won eight medals (out of 2 medal bet) on my first try! I then proceeded to lose multiple times.

I give it a 2/5 because it was a cute idea to assign pokemon levels to their medal values. Also the pokeball you use changes based on medals bet. There's also something eerie about the visual perspective of the background art.

Some naruto game (Banpresto, 2004) Bet 1-3 to get a team of 1-3 ninjas (story-related to Naruto, presumably). You then mash the button to attack enemies and throw shuriken, and try to beat the big snake at the end. 1/5, cute idea to make the ninja teams story-relevant, but the shmup-esque gameplay doesn't feel very accurate or interesting...

I wasn't sure what betting multiple medals in this game did - I never won once. The game has three stages, where you face an enemy, and in a JRPG-styled battle screen, roll a pair of dice. If your roll beats the enemy, you win! If you roll doubles, you do a special attack and win. If you get close to a double, a fairy might appear and let you mash the button in an attempt to 'roll over' one of the dice, and make a double.

If you win the first two rounds, you face the Demon King, who you can fight against infinitely for 2 medals. It took the above video creators 49 tries to win (and the reward is 50 medals).

I thought the art was cute. I would say Korokoro Quest was more 'fun', if only because the various game systems did a slightly better job at hiding the randomness... 2/5.

In this game, you choose from three minigames - feed-the-hippos, tug-of-war, or a footrace. Each game you just mash the button to try to win, and you usually lose, but if you DO win, you trigger a 'fruit roulette' which determines your reward! The art is cute, reminds me of the best of the 2D 90s cute cartoony spritework. The game boils down to basically losing all the time, but at least you lose medals in style! I give capcom 3/5 for this, since it at least had some attempt at artistry beyond a made-in-a-month single-game cash grab.

Overall, they were all pretty bad games, although fun as a short amusement. The most recent game was 2004, leading me to conclude that the market for this dried up and was replaced by gacha games and the more modern and flashy 3D card variants we see today, which I think are still likely luck-based, but feature more obfuscating or complex mechanics to potentially even the odds. (Dragon Quest Battle Scanners, etc).

So what was interesting about Kids Medal Games? There's something about the "betting" aspect of these games that also excites me. If we abstract some of these games into the "win or lose" states, what you get is kind of a RNG choose-your-own-adventure, where you are constantly betting money to try to see a new branch of the story (e.g., Korokoro Quest's demon king fight). There's an inherent sense of mystery to a seemingly easy goal (beating dice rolls) that is very hard to achieve (bullshit RNG making you lose). I think that 'sense of mystery' has a lot of potential. Imagine characters, towns, areas, whose fabric is integrated into a single or set of small, seemingly-simple minigames, centered around a money system.

The 'luck rituals' to these games - betting 3 tokens to 'up the odds' (by an unknown amount), mashing the button to re-roll a die in Korokoro Quest - is also kind of exciting. It lends an air of the impenetrable, akin to the 'improve pokeball odds' button mashing of old pokemon games.

What these "Kids Medal Games" brought into focus for me was how the "minigame-to-game" relation is something that's always potentially exciting if it goes beyond convention (conventional being a tedious fishing minigame whose reward is stronger armor, a totally random sokobon game that locks a powerup). With a bit of design and imagination, a super simple "Kids Medal Game"-style minigame could become not just more interesting, but potentially integrated into a game in an exciting way...

These Kids Medal games, or more generally, Gambling and gacha games, feel like unassembled parts, restrained in a state of primordial, short-term-pleasure and money-seeking ooze, waiting for other designers to pick up and evolve them into something more interesting.