So I started playing Nemuru Mayu (en: "Sleeping Cocoon") after a friend shared the OST! It's a game developed near the end of the PS1's life cycle, released in 2000 after the PS2 came out. It's a dungeon crawler set inside of four labyrinths/'spirit worlds', inside a a 'magic book' (??). While I have trouble 100% understanding the plot, the gist of it as that in the 1300s, some magic book appeared, which caused a lot of people disappear. However, one person managed to escape! But then the Black Death made everyone forget about the book... until present day, when you get sucked in (or something). Inside, you meet four "???" (Great Spirits), who have been trapped in there for a long time (...I think?) Anyways, they want to help you escape, and undo a curse. You also visit the memory of some other person who tried to defeat the "Sealed King", and the four spirits wonder why the person gave up. So you're tasked with investigating the four spirit worlds (red, white, black, blue), with the help of the four spirits.

Here's a full LP of the game (not mine).

According to a Japanese blog entry, the game was fairly well-hyped until many development troubles caused fans to get upset and forget about the game. However, it was still released! According to a blog entry from the mid-2000s by the scenario writer, it gained a small fan following, even with fans creating novels based on the game. The game's creative director was a photographer (Yukinori Tokoro), who perhaps had a hand in the art direction as well the use of real models for characters (for example, the four Great Spirits all have faces that are obviously photographs).

At the start of the game, you choose one of four spirits' to guide you through a corresponding spirit world. Red is the default, but I accidentally said no and ended up going to White, the Light world, guided by Shiriko. After doing this, you learn about the game's menu, the "Magic Circle Menu". It's basically your 'home base' - here, you equip your spells, equipment, check out your stats, save the game, change settings, learn new spells, and enter the dungeons. 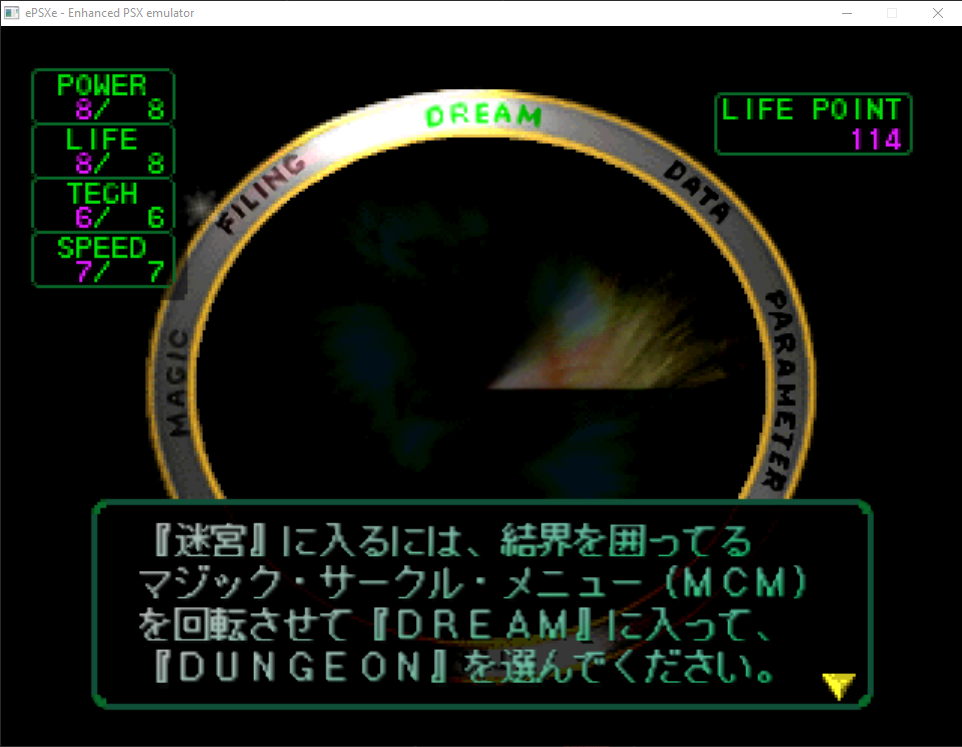 Anyways, you finally enter a dungeon. It turns out there's a barrier (??) dividing the spirits worlds from the "Magic Circle". The spirits can't enter the spirit worlds, but through the use of a "Doll" (Your avatar you equip stuff to), the spirits can perceive what the you see through the doll. 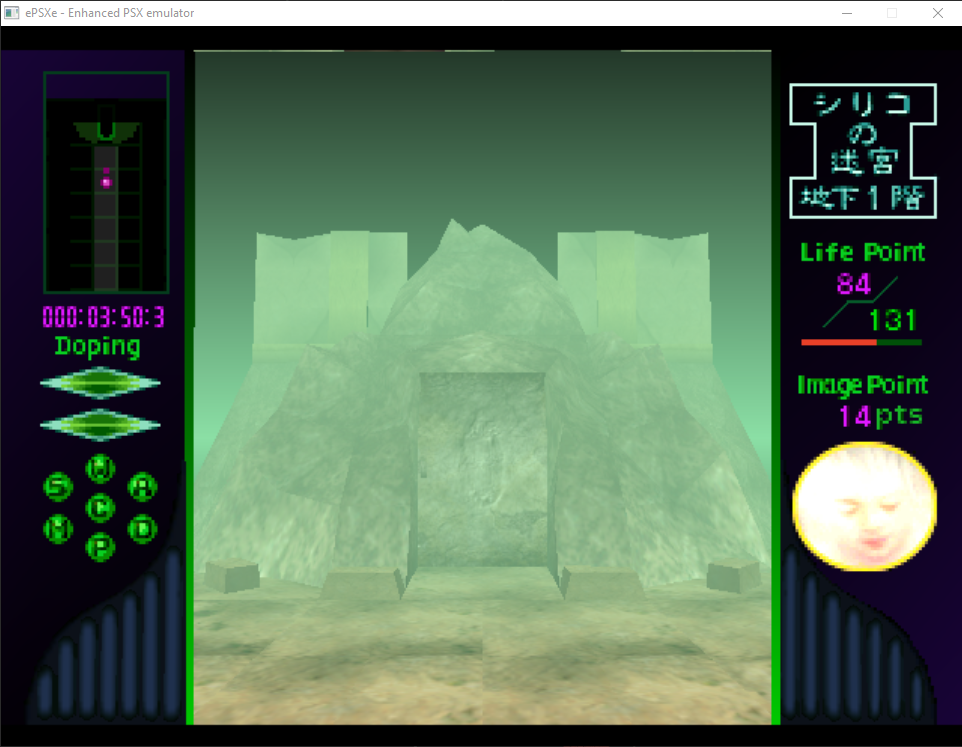 Then, there are battle tutorials. Actually, in the very beginning of the game, when visiting the memory of fighting the Sealed King, you learn a few aspects of combat - distance, and "coding". Fights take place on a 5x1 grid, although you see things in a first-person, dungeon crawler perspective. You can use melee attacks, block, or cast spells. Spells can't hit if you are 3 spots away from the enemy, i.e., if you're on the ends of the battlefield. Melee attacks only hit if you're right in front of an enemy. There are cooldowns on attacks (called "Blank Time").

"Coding" is what the game calls the magic system. When you cast a spell with a button (square, triangle or circle), a magic glyph appears, as well as 3 button icons corresponding to your original press. The glyph is shaped like a one-stroke character, so the as the glyph is 'drawn', you have to press the button when the stroke overlaps the icon. Based on how good your timing is, your spell gets a 1-5 star rating and does according amount of damage. It's fairly complicated and finicky, but kind of interesting in its jankiness!

Here's one of the Coding glyphs. I'm not fighting a fight here - I'm actually 'learning' a spell (more on that in a future post.) 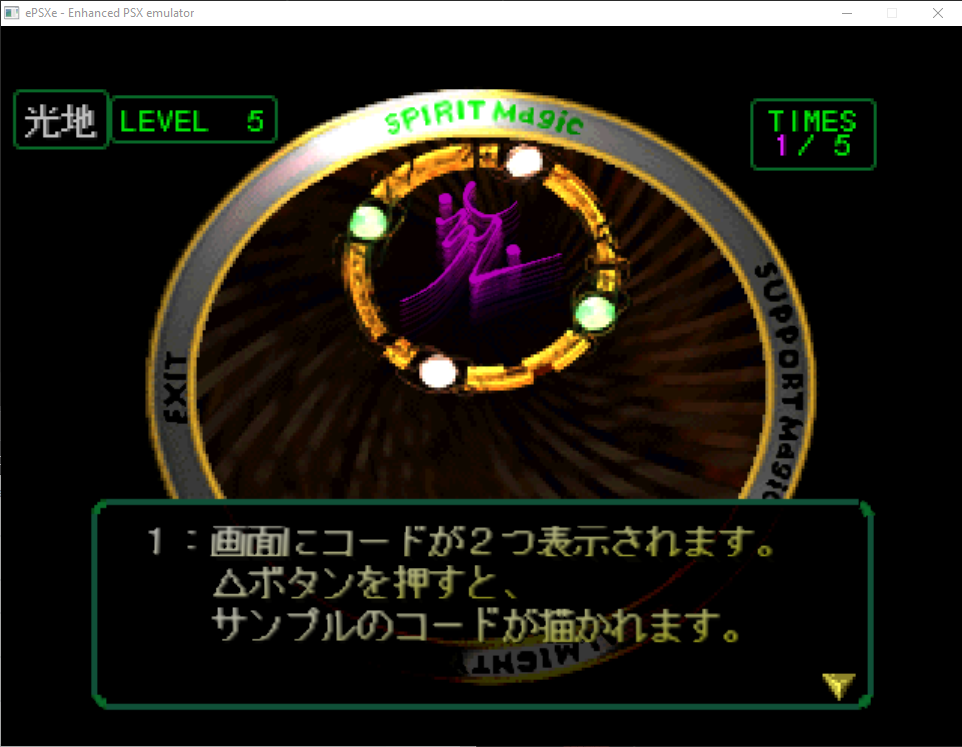 But... back to the dungeon. Here, we learn navigation, as well as some lore. The biggest game mechanic is how encounters work. There are blue bars in the UI on the left and right that light up based on where an enemy is coming from. Enemies sometimes chase you (slowly), but you can generally run away. You do another battle tutorial to learn how to use melee and items in-battle. You can equip items to your hands, as well as your fingers and body! You press L2 or R2 to bring up equipment on that side of the body, then make a selection to use the item. Some items cast spells, but so far I've just selected the weapon to do a melee attack.

You can turn around and run away by running towards your end of the battlefield. Upon winning, you gain "Image Points (IP)" - basically Experience Points. The game's stat system is interesting - you have four skills - health, magic attack, speed (your cooldown time), and magic accuracy (how generous the timing is for the Coding mechanic). However, there are 8 or 9 'stats' (understanding, memory, craftiness, imagination, concentration... etc), which influence the level of your skills. When you get Image Points, if you successfully leave the spirit world, the Image Points are randomly assigned to your stats. Each stat influencs two skills, so as the stats grow enough, the skills grow, affecting your character. I don't really know if there's a reason why there are 8 or 9 stats, other than atmosphere, but it's cool and thematic in a nice way! 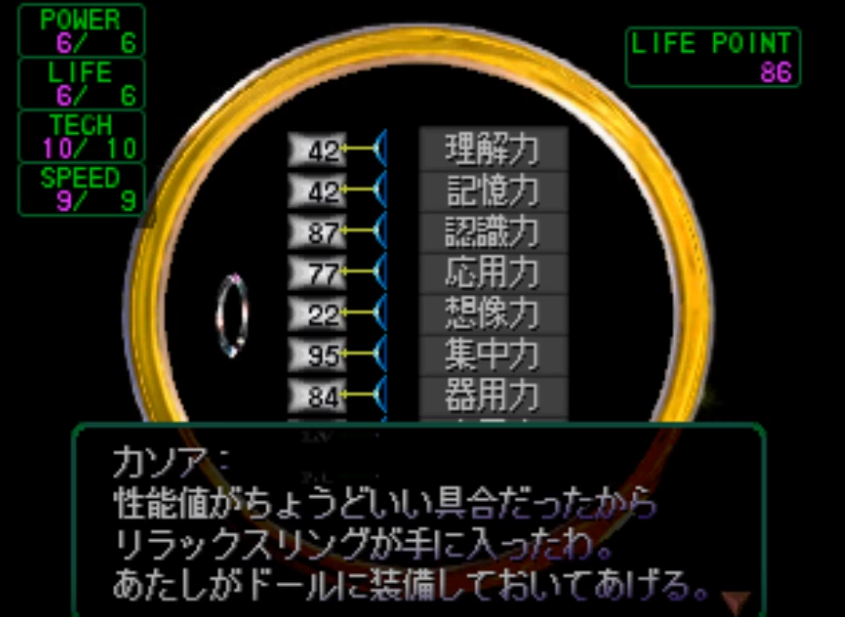 Anyways... exploring the dungeon, we meet "Flower People", and are tasked with finding a lost brother and sister, deeper into the dungeon! We also receive "Artifacts", which are unappraised items. To appraise an item, you have to leave the dungeon. If you die, you lose the item (lol). You also lose all your IP. There's a few bugs actually with dying at the wrong time... so use save states, haha. But appraising an artifact turns it into equipment. You can wear 10 rings, one on each finger! Some give spells, some give resistance... kind of a cute/interesting system.

After I appraised a weapon, it became a Rusty Sword. 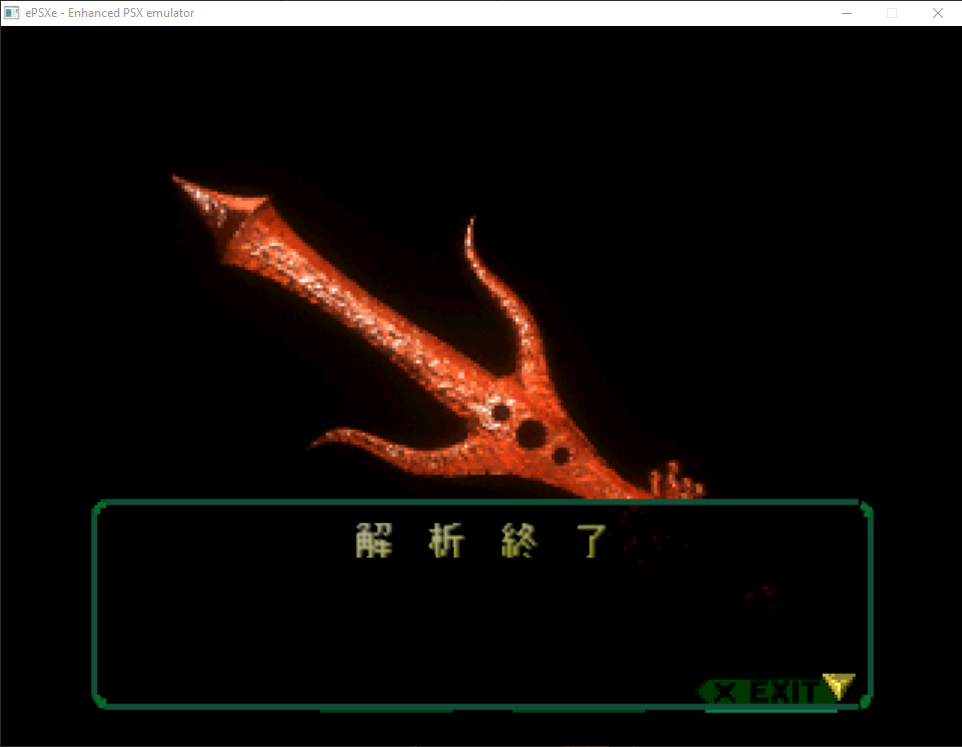 Lastly, in the first floor of the light dungeon there's a few tutorials on "Clash" and "Return". "Return" is probably better translated as parry/reflect. By starting to cast a spell RIGHT AS an enemy's spell *hits you*, it'll be parried. So far this is pretty tricky to do and a little janky. "Clash" is like when you and an enemy attack at the same time. When a spell is cast, it has some time until it hits you. If you cast a spell and your spell hits the enemy's, they cancel each other.

Complicating this is the "Sky and Earth" system. A spell can be "Sky" or "Earth" type (on top of its element), meaning it travels along the ground or in the air. You can't Clash or Return a spell unless it matches the right type! (I'm not sure about elemental matchups - darkness, fire, light or water).

Right, and there are traps! Traps can be destroyed, but you can't see some, as it comes in 4 types. Sometimes traps will disable your weapon permanently(?), which is INSANE and hilarious. But usually they do damage or give you an enemy encounter.

Lastly, a mysterious cave shows you a world map of the place you're in. It seems to be a tower, which presumably we need to climb to the top. But for now, we need to go further underground. At no point is it particularly clear WHERE we are, the game is mystifying and intriguing! It feels very claustrophobic - not because of the UI - but because you're left grasping for clues and unable to project yourself into any kind of 'real' space. 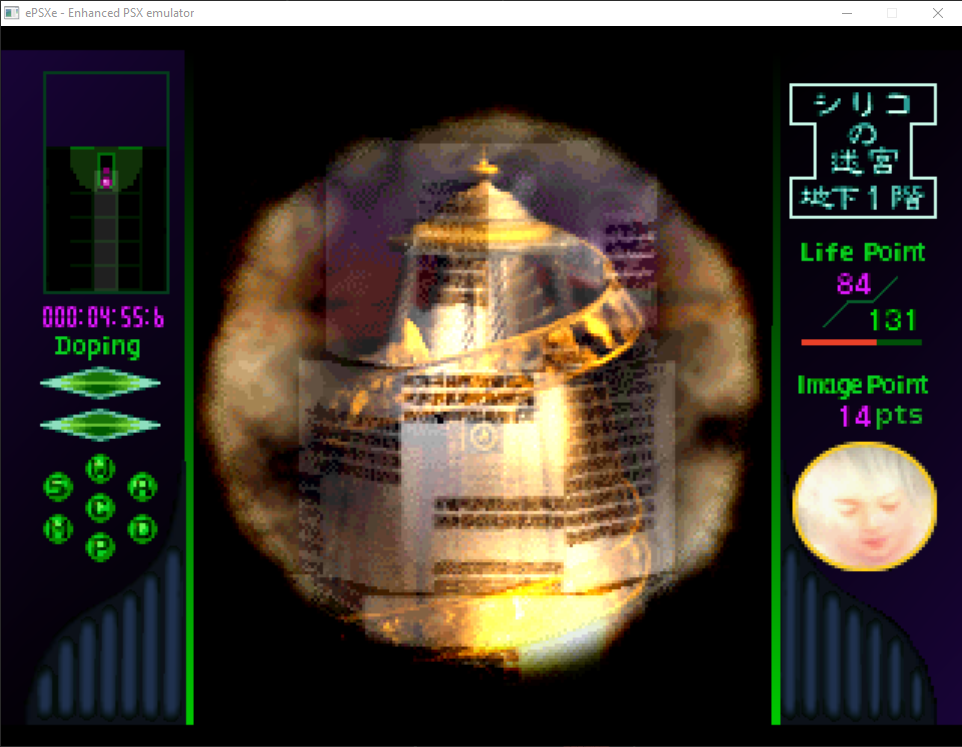 Of course, on one hand, in terms of pure meaning and direct literary themes, there isn't that much here (yet), but of course there will be a lot I miss just from playing in a 2nd language. There do seem to be characters, NPCs, so I think much of the story and writing is left to be seen. It's a lot of religious-feeling fantasy, which is cool and fun and can be inspiring in unexpected ways! The imagery and the mood are very interesting. There's a unique sense of loneliness and isolation that games like this are uniquely disposed to create, and I like that it does it without having to become a horror/scary game. In a way it reminds me of my game Anodyne, the way you feel like you're getting this partial glimpse into an unknowable world...

So far, I really like the game's seemingly overcomplicated systems. They really add to the mystic-feeling atmosphere and accentuate the sense of the unknown, even if they might not be that meaningful in the long run in terms of balancing. The music and sound design are always fitting, and the art really understands its limitations! Just watch through a video and you'll see a great mix of pre-rendered 3D, fog, choice textures and 3D Models.

The real-time fighting, even if it's pretty easy to die and the timing is janky. It truly feels like a FIGHT in the sense you're kind of unequipped, dying has really high stakes, and you don't even know if you'll get a block or a spell off properly! Maybe once I grind more it'll become easy... right now I'm just trying to go downstairs and this knight keeps kicking my ass...

Anyways, I'm looking forward to playing more! There's a few other systems I haven't explained yet (Lessons, Dream Credits), but I think they can wait.